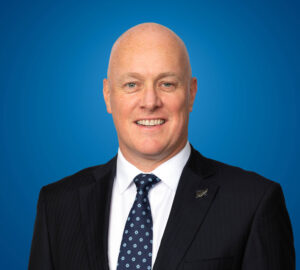 Christopher Luxon is the new leader of the National Party after just over 12 months as an MP, promising to “turn the page” on 18 months of disunity and chaos in the party.

Luxon becomes Leader of the Opposition, often called ‘the worst job in politics’, with the weight of expectations as a successor to John Key’s mantle as successful businessman turned popular leader and PM. Timing was everything for Key becoming leader two years out from an election as a tired Labour party sought a fourth term.

This time, two years out from the next election, Labour remains dominant in the polls (though down on its historic election result) and has a popular leader. Winning in 2023 will be challenging, but Luxon’s elevation gives National every chance for a fresh start and to be a contender.

In his first public comments as National’s fourth leader in two years, Luxon positioned himself and his Deputy Leader Nicola Willis as a “reset” for National, “drawing a line” under the events of the last four years. Luxon focused on his real world experience, and positioned himself as someone who gets things done.

Echoing Tony Blair’s ‘new Labour’, Luxon said “we will be the new National Party for New Zealand.” On economic policy, there has been speculation that Luxon would take National in a more centrist direction, however he was light on detail in today’s press conference and has given little indication of his own economic views during his short tenure in Parliament.

A social conservative, Luxon is quite open about his evangelical faith, which has raised questions about how that influences his views on policy – in his only conscience vote to date, he was one of just 15 MPs to vote against ‘safe areas’ around abortion providers. Today, he said his faith had been misrepresented.

This was a point he was also keen to counter in his maiden speech in March: “My faith is personal to me,” said Luxon. “It is not in itself a political agenda. I believe no religion should dictate to the state. And no politician should use the political platform they have to force their beliefs on others. As MPs we serve the common cause of all New Zealanders – not one religion, not one group, and not one interest.”

New Deputy Leader Nicola Willis, herself a rapid riser, balances out the new leadership team coming from the liberal wing of the party.

Luxon gives National the potential for a clean break from the troubles of recent years. His immediate challenge is to heal the wounds of a divided caucus. While there was no caucus vote in the end, the fact that Bridges only pulled out hours before the caucus meeting does not speak to a caucus firmly behind Luxon, yet.

He will need to articulate a fresh and optimistic vision for National, and win back the disaffected supporters who have departed to ACT. Opposition is about attack, but also about defining the political narrative. It’s a fine balance between relentlessly pointing out the flaws of your opponent, and offering a constructive alternative. That will be Luxon’s challenge.

National has scored some successes attacking the Government’s COVID response, but the shifting sands of its own pandemic policies have not helped win back support in recent polls.

Luxon’s experience in business, most recently for one of the most trusted New Zealand brands, will be an advantage. The successful businessman narrative, much like Key’s, will be one National will want to exploit. Luxon will need to let New Zealand get to know him beyond his profile as a former CEO of Air New Zealand.

He is undoubtedly an experienced CEO. But it is yet to be seen whether he has the political skills for the role of Leader of the Opposition, which is a heavily scrutinised position that no role outside of politics can adequately prepare someone for.

For the first time since the beginning of the pandemic elevated Labour to unprecedented support and saw National’s collapse, New Zealand politics has some unpredictability.

Masters of Commerce in Business Administration University of Canterbury