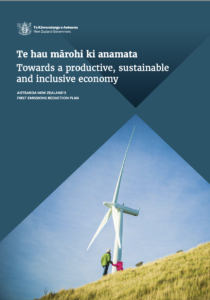 The Government has released its first Emissions Reduction Plan, which lays out how it intends to reduce New Zealand’s net greenhouse emissions to meet the first Emissions Budget (2022-25) and the subsequent Emissions Budgets (2026-2030 and 2031-2035). At the same time, the first allocations of funding from the Climate Emergency Response Fund have been announced.

The Plan contains large uncertainties about the degree of reductions that will be achieved. The high impact scenario shows the Budgets being comfortably achieved. The low impact scenario would see them fail, requiring the Government to purchase credits from overseas to meet its Budgets, additional to the credits that will be required to meet New Zealand’s international commitment (Nationally Determined Contribution) even if the Budgets are achieved.The Government argues the plan is good for the economy, as well as the environment with Prime Minister Jacinda Ardern saying “Addressing climate change now means we can bring down the cost of living. Reducing our reliance on fossil fuels will shield households from the volatility of international price hikes while reducing transport and energy bills. Households are already seeing the impact of escalating petrol prices and this plan sets out practical ways to cut power, transport and other costs by taking climate friendly actions. Cutting agriculture emissions and greening our exports protects our brand in a market where international consumers are looking for products produced with care for the climate.”Political reaction to the Plan has been muted so far. It contains little in the way of bans or price increases that will directly affect households that opposition parties would jump on, and includes a large programme that households could benefit from in the form of the car scrappage scheme. National criticises the assistance for business to decarbonise in general terms saying “We expect those companies to be cutting their emissions without help from taxpayers. A significant part of the Government’s plan looks like a corporate carbon bailout”, while ACT has criticised the car scrappage scheme.Energy & Industry, and TransportThe Plan’s biggest contributions to short-term emissions reductions come in the energy & industry and transport sectors, reducing emissions by 4.4-8.1MT from baseline in the first Budget period. The bulk of funding announced from the Climate Emergency Response Fund goes to these sectors. New funding to achieve these reductions includes:

There is no stated ban on new gas connections, or on fossil fuel car imports, both of which were suggested by the Climate Change Commission.ForestryThe forestry sector is being relied upon to achieve the largest contributions to the reduction in net emissions, particularly over the later budgets growing from 6.5MT of removals in the first budget to 11.5MT in the second and 16.3MT in the third. This sequestration is the result of existing policy settings, however, and there is no substantive specific new policy for this sector in the Plan. The Plan notes the consultation over removal of exotic species from the permanent category of the Emissions Trading Scheme (which would significantly increase net emissions in the outyears) and notes that incentives for planting native species are being considered. The Plan affirms the Government’s interest in increasing the value stream from forestry through onshore processing and bio-fuels. More detail is expected when the Industry Transformation Plan later this year.Building and constructionThe built sector is recognised both as a source of emissions in the construction phase and the production of building materials, as well as locking in future emissions through the energy use in buildings. The Plan announces actions to:

The Climate Change Commission’s recommendation for mandating efficiency standards for commercial buildings has been adopted.AgricultureBiogenic emissions from agriculture are not included in the Emissions Trading Scheme, and it is a politically difficult subject for the major export earner that accounts for half of New Zealand’s emissions. The Plan confirms the Government’s intent that an emissions pricing mechanism is developed, and agricultural emissions are priced by 1 January 2025.Ministers will take decisions on pricing agricultural emissions by the end of 2022, to enable implementation by 2025. They will be assessing He Waka Eke Noa’s recommendation against the legislated backstop option of bringing agriculture into the NZ ETS at the processor-level. The Plan also announces $339m for a new Centre for Climate Action on Agricultural Emissions, aimed at developing and commercialising products which help farmers reduce emissions.WasteThe Plan focuses on the ability to reduce biogenic methane emissions from waste, as well as create a circular economy:

If clients have particular questions about how the Plan will affect your sector, we are happy to provide a briefing.