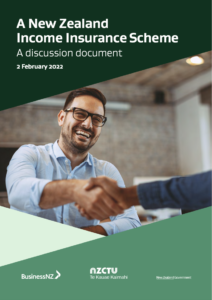 Consultation is now open on the proposed New Zealand Income Insurance Scheme, which would see workers who are made redundant, laid off, or who have to stop working because of a health condition or disability, receive 80% of their usual salary for up to seven months (capped and prorated an annual salary of $130,911)

Social insurance schemes are used in most OECD countries for unemployment, as well as other payments covered in New Zealand by our benefit system. New Zealand has experience in a similar scheme, ACC, for injuries that prevent people working.

The key features of the proposed New Zealand Income Insurance Scheme are:

The work has been informed by the COVID crisis, which showed the need to address New Zealand’s low level of unemployment support, which is among the lowest in the OECD. The threat of mass unemployment in 2020 that would have caused an abrupt income drop for families and created a demand shock, driving a recessionary spiral, was averted through the ad hoc use of the Wage Subsidy, paid through government borrowing. This has shown the inadequacy of relying on the Jobseeker Allowance benefit (just $200-$300 a week) and the need for a permanent solution to avoid both personal and economywide impacts of unemployment.

Following the consultation, if the Government chooses to proceed, it will need to pass legislation to change ACC’s purpose to allow it to work on the development of the scheme. Legislation for the Income Insurance Scheme itself it expected to be introduced to Parliament later this year at the earliest. The Scheme is likely to come into operation in 2024. The proposals are available at www.mbie.govt.nz/incomeinsurance.

Consultation closes on 26 April 2022. Capital is able to assist clients with submissions – please let us know as soon as possible for our planning if you would like us to do so.

We are also able to arrange briefings with Council of Trade Unions Economist Craig Renney (featured here), who is a principal architect of the scheme, to help clients learn more.