Chris Hipkins set to be next Prime Minister

Chris Hipkins set to be next Prime Minister 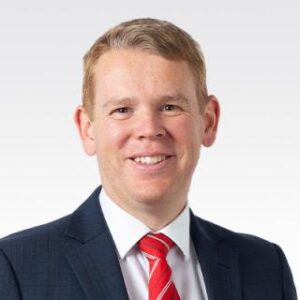 Chris Hipkins is set to be the next Leader of the Labour Party and Prime Minister of New Zealand, after Jacinda Ardern announced her resignation on Thursday.

Hipkins was the only nomination for the Labour leadership when nominations closed at 9am this morning. Labour MPs had been in intense discussions over the last 48 hours to unite behind a single candidate and avoid the distraction of a public leadership race.

The Labour caucus will meet in Wellington on Sunday to confirm Hipkins in the role. He will then work with Prime Minister Ardern on the process of transition. Ardern has signalled she will leave the role no later than February 7, however it is expected the transition will happen much sooner.

Hipkins confirmed today that he will retain Grant Robertson as Finance Minister but would not be drawn on other positions, other than to confirm he will be conducting a Cabinet reshuffle. Social Development Minister Carmel Sepuloni is tipped for the Deputy Leader role after Justice Minister Kiritapu Allan ruled herself out of contention.

Hipkins, 44, is the MP for Remutaka, an electorate based around the working class satellite city of Upper Hutt, north of Wellington. Hipkins has held this electorate since he entered Parliament in 2008 in the same intake as Grant Robertson and Jacinda Ardern.

After graduating, he worked as a policy advisor for the Industry Training Federation, as a training manager for Todd Energy in Taranaki and as a political advisor to former Prime Minister Helen Clark.

He is a doting father of two children and is a keen cyclist, gardener and DIY (home improvement) enthusiast. He has a famously poor dress sense, which includes cargo shorts, old hoodies and dirty dog sunglasses. In his weekends he is frequently seen at hardware stores and supermarkets in his electorate chatting with constituents. Hipkins is known to be fond of a sausage roll and a Coke Zero to get started in the morning. He is known around Parliament as “Chippy”.

Hipkins takes a pragmatic approach to politics. His worldview is based in traditional labour values but he is a keen political strategist with a strong sense of politics as the art of the possible and the need for politicians to take the public with them. His instincts often place him on the right of the Labour caucus but for pragmatic rather than ideological reasons.

He has perhaps the best understanding of the machinery of government of anyone in Parliament, a skill that he put to great use when trying to wrangle the public service through the Covid-19 pandemic. He also has a deep knowledge of Parliamentary process and has served as Leader of the House throughout the Ardern Government.

He is a political animal, has a bookshelf full of political biographies and is known to enjoy the political rough and tumble.

His communication style is plain-spoken, direct and upfront and where he has made mistakes he has made a point of admitting to them and moving on.

In his media standup today, the first since he became the sole nominee for the leadership, Hipkins was careful to avoid signalling any political positions. He paid tribute to Ardern’s leadership through a tumultuous time in New Zealand’s history, but noted he is his own person and will take a different approach in some areas.

Labour insiders believe Chris Hipkins is best placed to win back the Middle New Zealand vote that has been lost to National over the past year. His background as a boy from the working class Hutt Valley is seen as a useful foil for National’s leader, former CEO Christopher Luxon, at a time when cost of living and pressure on family budgets is paramount

Hipkins will need to decide what to do about a series of controversial policy reform areas that have become a drag on Labour’s popularity, such as Three Waters, social unemployment insurance and the TVNZ-RNZ merger.

It is argued these programmes aren’t necessarily unpopular on their merits, but at a time when families are under economic pressure due to high inflation, rising interest rates and economic uncertainty, the Government has appeared distracted by issues that aren’t core to people’s lives and this has made them seem out of touch

Hipkins is not attached to any of these policy reforms and is in a unique position to clear the decks and reset the agenda for Labour. This may involve a renewed focus on cost of living, including new initiatives to support family budgets.

Law and order is another area of vulnerability for Labour where Hipkins may look to signal a renewed focus. Hipkins took on the Police portfolio in June last year after the Government came under sustained pressure over gang violence and a series of high profile ram raids.

Hipkins is a pragmatic political operator who enters the job as a known quantity, a safe pair of hands and with a reputation for competence. He will not seek to replicate Jacinda Ardern’s star power and will instead likely position himself as a straight-shooting, workmanlike leader suited to a time of economic uncertainty and pressure on family budgets.

He will likely take a more combative approach to the opposition, which would be a change of strategy from Ardern, whose style tended to avoid political antagonism or negativity.

It is yet to be seen whether Hipkins will be able to turn Labour’s fortunes around. In politics timing can be everything, and it is possible Hipkins will not be able to change the political tides.

Hipkins has indicated however that he intends to fight to win the October 14 election and be more than a caretaker Prime Minister.